February 2012 Artist in the Spotlight

Patric Rickard
From the Desk of Laura Lou…

I am proud to introduce an amazing Artist friend of mine, Patric Rickard. Pat lives in Ozello during the winter months with her father and brother Randy, and spends the rest of the year in Ohio with her daughter Kerri. Her talents are endless and I must say she simply amazes me! She has become the Village Painter through time and as you walk around the grounds, inside and out, you will see why. From Christmas parade floats, to wooden spools for events…a piece of her is everywhere.
Her latest masterpiece for the Heritage House is an outstanding image of a rug on the floor of our back room, which will be a bedroom setting in the near future. Be sure to check out her talents at her tent on Saturday, inside the Heritage House and at SuGaBuG Kids too! She has brought sunshine to me and the Village people by just a stroke of a brush. If you like what you see and would like to know more, contact the Heritage House at 352-564-1400 to schedule an appointment!
I asked Pat to write her story and am excited to share it with you! From childhood up until today…here is the real Patric Rickard!
Who is Patric the Artist? 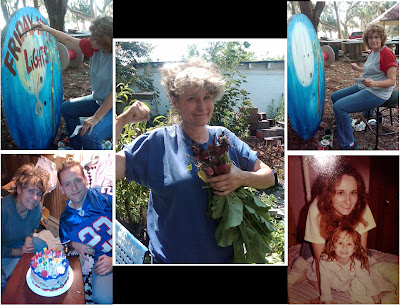