From the Desk of Laura Lou Tolle Fitzpatrick 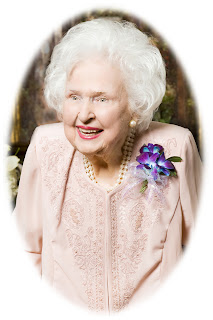 For those viewers who have not heard, our mother and wife Kay Tolle, passed away on August 3, 2012. She was diagnosed with Pancreatic Cancer just a few short months prior, in May. Losing her, as many of you have experienced as well, is a heartbreak that is like no other. Our family is touched by the cards, calls, food, flowers and visits since her sickness and passing. Truly brought smiles through our tears!

We wanted to share a story Johnny Grannan,
president of the Citrus County Historical Society, wrote about mom's life.
We enjoyed, and we hope you do too! 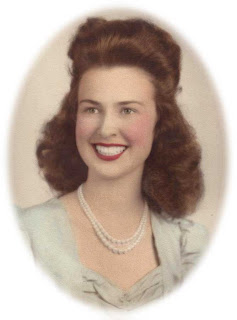 Kay Barco was fifteen when this picture was taken but looks older. The only child of Edna Eubanks and Hugh Barco, she was born in an Ocala hospital on September 18, 1925 She took her first train trip a few days later when her parents bought her home to Crystal River. Named Beulah Katherine after both grandmothers, she was first nicknamed B.K., then finally Kay. She was the fourth generation to live in Crystal River being descended from the Miller, Edwards, Eubanks and Barco families.

When her parents started working in Inverness, she moved there in elementary school and graduated from Citrus High School in 1943. She went to Florida Southern College where in 1945 she met Edgar Tolle, Jr. who had returned to college after serving in the Air Force. Within a few months she decided he was the one to marry. They eloped to Georgia in March, 1946 and were married for 66 years. After graduation, she taught school for several years in both Inverness and Crystal River. She and Ed had three children, Edgar Earl III (Eddie), Hugh and Laura Lou. Eddie, also known as Tuffy, died in 1975.
After moving to Crystal River in 1953, she became involved in community activities.

She was one of the founders and first president of the Junior Woman's Club, following in the first steps of her Grandmother Katie Barco, the first President of the Village Improvement Society in 1907, a predecessor of the Woman's Club. Politics was always a part of her life. Both of her grandfathers and father were on the City Council. Her father also served as County Tax Assessor for over 20 years.

She was a very astute businesswoman and along with her husband developed several housing developments one being Tropic Terrace in 1959, the first subdivision designed for young families. She was also instrumental in the creation of Heritage Village which consists of her mother's childhood home and surrounding buildings.

Throughout her life she always dealt with adversity with a smile and a determination that any task could be accomplished but you had to be organized and have a plan. When she passed away on August 3, 2012, she left behind a legacy of service and caring which her husband and two children will carry on in her honor.

Email ThisBlogThis!Share to TwitterShare to FacebookShare to Pinterest
Labels: My Heritage from the Heart